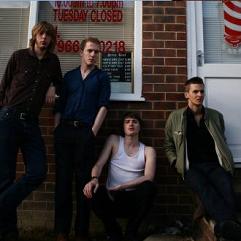 The new and improved Islington Garage, or as we should correctly call it, the Relentless Garage, is starting to get its hands dirty.

While it remains a bit too clean round the edges, there is much to commend it as a venue, even though these were temperatures the Mediterranean would have been proud of. That was all forgotten once the Wild Beasts set about showing us just why they are a band to savour.

First up was a stripped back support slot from Blue Roses complete with sonorous viola, occasionally shrill violin and, towards the end, a fulsome bass drum. This was probably a case of wrong time, wrong venue, given the incessant chatter from the bar, but Laura Groves’ torch songs nonetheless made an affecting impression, with their simplicity and direct communication. When she moved centre stage, she was a more compelling presence.

Kendal’s finest export since mint cake were compelling even before they arrived, a starry night backdrop greeting the silhouettes of Hayden, Ben, Tom and Chris. Hayden it was that took the spotlight initially, given an almost Biblical shaft of light like an archangel, before the lights pulled away to reveal a newly bearded singer.

The band were thrilling live, with Chris Talbot’s drum work far more intricate than it appears on record, while Hayden and Ben switched vocal duties to brilliant effect, the latter getting more tension into his voice in a magisterial All The King’s Men, with his vocal partner offering a rich baritone in support.

At times Hayden looked as if he was on a rowing machine in the corner, but it turned out this was how he threw himself into his keyboard playing. When he sang he was more statuesque, eyes closed as if somewhere else, and built Hooting And Howling through a fiercesome crescendo with wonderful guitar work from Ben.

What impressed most about the band was their complete lack of pretence, for despite an epic quality to their guitar sound there was no padding, no unnecessary playing to the gallery. This made The Devil’s Crayon even more enjoyable, the swooping vocal from Ben paired with Hayden’s more exultant bursts.

It was also abundantly clear how much the Wild Beasts have progressed in such a short space of time, as the difference in material between albums one and two is marked. The first was a statement of potential, while the second has taken a big step towards fulfilling that potential. There’s still more to come, which is the most exciting part – this band is starting to hit the crest of a wave.