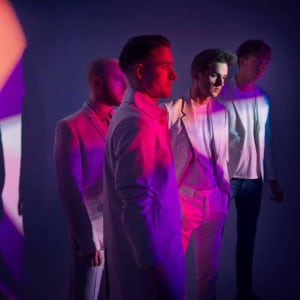 “If we just stuck to playing guitars, we wouldn’t have this fucking problem,” Hayden Thorpe announced to laughter, straight after the synths failed to kick in on opener Mecca for the second time in quick succession. It probably wasn’t the way Kendal four-piece Wild Beasts had planned to start their show at Bristol’s Academy, but, nevertheless, the end result more than justified the extra 10 minutes the crowd spent waiting for the synthesisers to be fixed.

Thorpe may joke about the new addition to the band’s repertoire for their latest record, Present Tense, but it is a subtle shift that has seen Wild Beasts’ stature grow in prominence since the album’s release. Not only did it achieve their first UK Top 10 album chart position – something that is quite remarkable for a band considered too obscure to really have a mainstream impact – but the new direction has enhanced their live performances.

Unsurprisingly, Present Tense was aired heavily once everything was in working order. But rather than being an unwanted nuisance that prevented older, better-known, songs being played, tracks from the new album were greeted as enthusiastically as the rest of the band’s now impressive back catalogue. Mecca soared in the small, claustrophobic setting of the Academy, while the delicious synths of Sweet Spot provided the perfect backing to Thorpe’s unique falsetto.

It was not all about Present Tense though, with the marvelous Reach A Bit Further from third album Smother allowing Thorpe and co-frontman Tom Fleming to give the audience their first taster of the pair’s vocal interplay. Fleming’s rich lower register was also put to good use on the one track from Wild Beasts’ 2008 debut, Limbo, Panto, which provided a brief glimpse of just how far the band have come in the last six years.

There was also room for a few tracks from their Mercury-nominated second album, Two Dancers, with both Hooting & Howling and The Fun Powder Plot played back-to-back to the crowd’s delight. However, as good as they sounded – and Hooting & Howling, in particular, was totally engrossing in its simplicity – the night belonged to Present Tense and the electronic boost that has elevated Wild Beasts to another level.

From the devastatingly beautiful, slow-burning synths of Pregnant Pause to the infectious pop of A Simple Beautiful Truth – where Fleming and Thorpe’s vocals once again came together in a bewitching back-and-forth – the band could do no wrong. The ominous Daughters, which demonstrated just how effective Wild Beasts are when they move into darker territory, delivered a whole new experience, with its thundering synths accompanied by an impressive laser show.

Elsewhere, Palace illustrated Hayden’s vocal range to its fullest, with every note delivered with pitch-perfect accuracy, while Nature Boy and the haunting A Dog’s Life – which finished the main set – gave Fleming another opportunity to shine. Loop The Loop and Bed Of Nails from Smother also made a welcome appearance, adding some of the pent-up sexual frustration that was threaded throughout the band’s third album to proceedings.

Thankfully, for all those lucky enough to be there, Wild Beasts returned to the stage following the shortest of breaks to perform an encore that was every bit as good as everything that had gone before. The crunching synths and the cries of “Don’t confuse me for someone who gives a fuck” from Wanderlust sounded as intimidating as they did on the record, while Smother’s End Come Too Soon provided a fitting finale to a wonderful show.

While the performance may have started with an unfortunate technical blip, everything that followed was near perfection. Wild Beasts are undoubtedly at the top of their game at the moment, but unlike so many of their contemporaries, there is a distinct feeling that there is much more still to come. Whatever delights they may be, for now, just sit back and bask in the glory of one of Britain’s very best bands.