by Max Raymond
published: 11 May 2011 in Live Music Reviews
Tweet 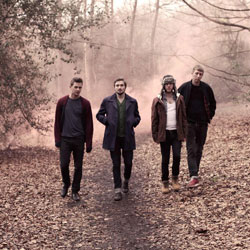 When Wild Beasts booked the Wilton’s Music Hall a few months ago they probably had no idea that their third album, Smother, would be critically adored by everyone who listened to it, making them the talk of the town in the process. Yet this is the situation in which the Kendall four-piece find themselves in the week of its release. To mark the occasion, tonight is the first of a two-night residency in one of the most gorgeous venues in East London and it’s pretty much packed out.

Their popularity has grown gradually. Through glowing reviews, an increasingly solid live reputation and the small matter of a Mercury Prize nomination for second album Two Dancers, selling out theatres looks increasingly like what they were meant to do.

Opening song Plaything gives an early indication of the tone of the set; nearly all of the material from Smother gets played and, whilst not quite as upbeat and uptempo as the rest of their discography, it’s every bit as intense and mesmerising. Much of the audience is still trying to grasp their new sound, but they’re attentive and patient. Lion’s Share and Invisible showcase the band at their most hushed, but Loop The Loop and Reach A Bit Further pick up the pace. The best of the new tracks is the epic Smother closer End Come Too Soon, which starts off peacefully before fading to a simmer midway through and then ascending once more towards the end.

Spellbinding and watchable though the new material is, their older material comes across as a welcome contrast. Four songs are picked from Two Dancers, with the rapturously received Hooting & Howling, All The King’s Men and We Got The Taste Dancin’ On Our Tongues sounding even more urgent than on record. What might have been described as quirky a couple of years ago now sound like inventive indie anthems, and with the crowd in full voice it sees both Hayden Thorpe and Tom Fleming strut the stage as confident and convincing frontmen.

Still, Wild Beasts sound as though they have a gear in reserve, spare capacity that will see them grow their unique ouevre into a yet more powerful and effective force.

Wild Beasts played: Plaything, Loop The Loop, Deeper, We Still Got The Taste Dancin’ On Our Tongues, The Devil’s Crayon, Invisible, Albatross, This Is Our Lot, Bed Of Nails, Reach A Bit Further, Hooting & Howling. Encore: Lion’s Share, All The King’s Men, End Come Too Soon.